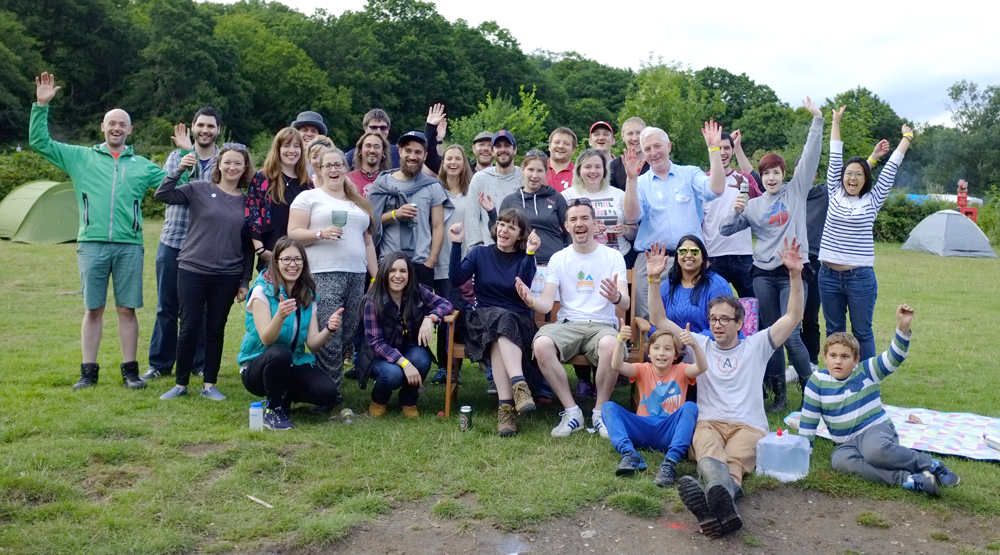 Recently I blogged about the Agile on the Bench conference, a minimum viable conference in a campsite that I ran with David Lowe. It happened last Saturday, 25th July and it was an awesome day. The speakers and audience were fantastic and, much like our lunchtime events, the sun came out, despite the heavy rain the day before. In my last post I talked about what we were trying to achieve and here I’ll talk about the successes, what we learnt, where we could improve and share the conference budget.

You can read up more about the speaker talks and workshops on David’s blog.

We sent out a survey to attendees and speakers after the event and their feedback is included in the post below. The overwhelming aspect that people liked about the conference was that it was relaxed, a perfect size to talk to other people, the group was great and it was fantastic value for money.

We set out with a number of the aims of the conference that I talked about in my last post, these were:

So I’ll go through each of these aims below:

It’s accessible – both financially and by location (to London)

We found a campsite with a conference centre that was on a tube line (Debden house), we included a tent pitch in the price and made sure the ticket price was kept low (just £35 a ticket). We did this by only spending the minimum we needed to (see later on in the post for the full budget) and securing some sponsorship to cover extras.

To get there people came by tube, taxi and cars. Many people came from London, but we had people from Kent, Brighton, Cambridge and even Liverpool. The conference email group was buzzing with offers of lifts from the station or further afield, so some of our delegates got to know each other before they stepped foot on the campsite.

Everyone that came thought it was great value for money, or

Spectacular. Camping-as-accommodation is a masterstroke

100% of the people who responded said they would consider coming again.

I think it’s safe to say that we did pretty good with this aim.

It’s got some great content and people will learn

The speakers were great, we were blown away with the quality and diversity of talks and workshops that were submitted. We carefully curated which session went where, we made sure that talks had a flow to them: meditation and mindfulness was before lunch, a workshop session straight after lunch to wake people up and a game on communication just before the party to make sure everyone got to talk to each other, this all worked really well.

The audience responded really well and learning was had.

I enjoyed that I went away at the end of the day with several significant bits of useful learning – this doesn’t happen as often as you’d like nowadays.

All speakers were there on their own merit, we didn’t offer sponsor slots and as the costs were low we weren’t pressured into offering gold packages that might include them.

We kept it small and friendly and this didn’t go un-noticed. People loved the social aspect and the time left open for talking, people have been busy connecting on social networks after the event.

It was nice that the size meant that by the end of the conference, people were at least familiar with others in the group

The number of attendees was just right – plenty of perspectives and ideas but also possible to interact with everyone to some extent.

It worked as a conference but was deliberately low-tech and informal. You mostly couldn’t tell who was speakers and who was attendees, which was great.

It wasn’t easy, but it was manageable.

As there were just two of us organising the conference we were able to make decisions quickly face to face, through IM, trello and google docs. We made our own website, did our own design and marketing so we weren’t reliant on third parties.

We reduced overhead on tickets by making them non-refundable, but we did hold a waiting list and helped people to re-sell tickets.

During the conference everyone chipped in with getting lunch out, making coffee, moving chairs or making bonfires. Keeping the conference small and relaxed meant that people felt a part of making it a great day.

We were new to running an event like this, so it was a learning curve. We did ok at this aim, but if we do it again, I think it would be easier.

People certainly looked like they had a lot of fun 🙂

I think we did well here.

Other things we learnt

We kept the no-tech theme of the meet-ups, kept talks short (20mins) and of course brought a bench along. People really enjoy this format.

I think this style is one of a kind and I would suggest to keep it like this.

The no-slide policy that forces the presenter and the talk to be a lot more interactive in getting the concept across as opposed to the technical.

The talk timings were perfect anything longer would be dragging and anything shorter, wouldn’t have allowed the speaker to get their point across.

We knew this already, but using it with Stripe for delegate fees and sponsorship made us love it more.

People will drop out

We had 40 people (speakers and attendees) booked in and ended up with around 33 there, so about 17% dropped out. Mostly they got in touch and we knew why, this included: Weddings, sickness, childcare problems and last minute family arrangements, this is unavoidable. This wasn’t a bad thing as we would have been over crowded with more people (a learning about the size of the space).

According to import.io, typical drop off is 20-50%, so there is always a risk that people won’t show up, we didn’t oversell on purpose, but it seemed to work in our favour.

You can have a gender balanced agile conference

We make an effort to ensure gender diversity in the speakers at the lunchtime meet-ups and we wanted to continue this for the conference. We spent a little extra time during the submission period to reach out to women to ask them to propose talks, this included posting to the Ada’s list google group and talking to our own networks. It meant that we had enough high quality talks to pick from and to hit our 50/50 target whilst keeping not compromising on a high standard.

The delegate split was out of our direct control, aside from making sure we had a conference code of conduct, we sold out before announcing the speakers so that didn’t have an influence on it, I’m really happy to see that it wasn’t far from 50/50 and it points to agile on the bench being seen as an inclusive event.

I enjoyed the diversity of attendees and general ‘down to earth-ness’. Wasn’t your average audience (men in David Brent style shirt and jeans talking over each other and arguing loudly) genuinely felt friendly.

We didn’t do it for the money, which is good because neither David or I took any fees for our time and both of us sponsored it through our own companies.  Our speakers didn’t receive fees either, just a free ticket to the event and the wonderful gift of a model bench. This was about people in the community giving back to the community and having a great day.

We were left with just £87.57 after the conference, which we have decided to donate to the charity Bench Outreach.

We promised full disclosure of the budget and here it is:

Which breaks down as:

There is always room for improvement

We know that things can always be better, we made some compromises to stick to our principles and keep it affordable, this was never going to be a conference at the Ritz. Here is attendees said when asked what was missing:

We also had a bit too much food and booze, but people were able to take that home with them as an added bonus.

We’re having an organisers retrospective next week, so I’ll add any other learnings that come from that here once we are done.

I’m so pleased with how the event went and am so grateful to the speakers, the delegates, my co-organiser and my husband Stephen for jumping in and helping make sure we had morning coffee.