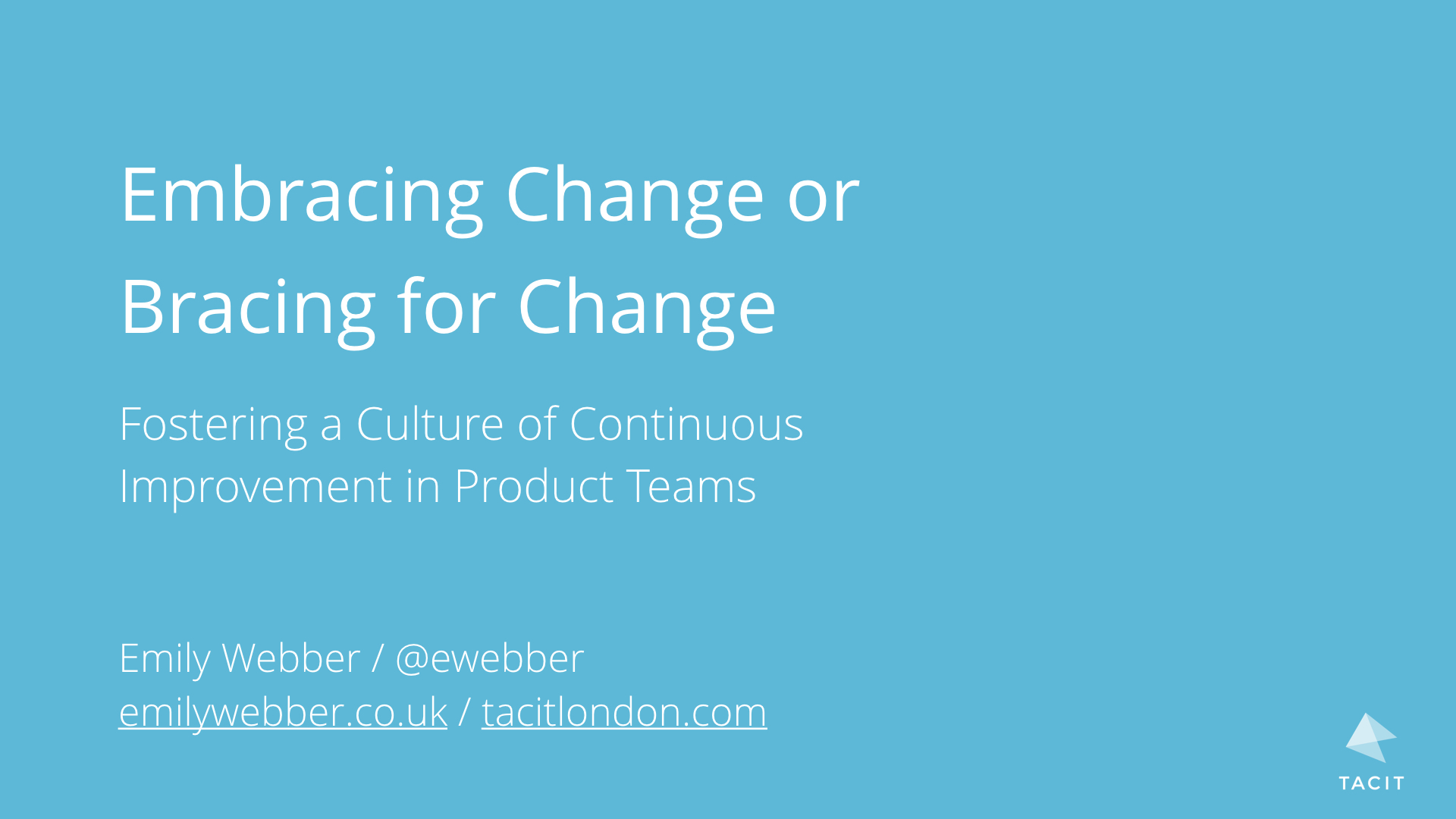 I was recently invited to talk at the Turing Festival on the Product / People day. Here is that talk that I gave:

Firstly it’s worth me explaining why the title Embracing Change or Bracing for Change. I often give Agile training for people and teams new to Agile, one thing that I tend to cover is the Agile Manifesto and its principles. I talk about agile teams embracing change and ask people if they embrace change. All too often the answer is along the lines of “change is thrown at us all the time and we deal with it”, I’ve come to explain this as bracing for change rather than going out and seeking it (embracing change).

This talk is designed to help you understand some reasons that people resist change and give you some tools to use with your own teams and organisations.

As I was talking to product people, I wanted to relate something they were familiar with to how they can improve teams, so I referred to Lean startup and the scientific method. I related to this to how they should be approaching teams.

You don’t need to only use the scientific method and hypothesis for products, you can also apply this to teams.

Remember in order to know what’s working, you should only change one thing.

To kick things off, I wanted the audience to think about a vision for their perfect team, something you can do now. We will come back to this later on in the slides.

Before we start trying to create a culture of change, we need to understand why there it doesn’t already exist and what stops people from embracing change.

You will often hear phrases like “this is just how we do things around here” or “it’s always been this way”. These are cultural statements, there may be perceptions of how things “have” to be done, which are based on culture rather than anything real.

In March 2016, the Medical Research Council conducted an experiment to test uncertainty and stress ucl.ac.uk/news/news-articles/0316/290316-uncertainty-stress. They hypothesised that uncertainty would lead to higher levels of stress. To test it they had participants play a computer game, at the same time measuring their stress levels. During the game, participants lifted up rocks that might have snakes under them, when there was a snake under the rock the subject was given a painful electric shock. Participants showed higher levels of stress when there was a 50% chance of getting a shock than when there was a 90% or 100% chance of getting a shock.

To counteract this, get into the habit of changing so that uncertainty is more familiar and less stressful.

Don’t forget to support people through this change and don’t throw out everything they have already learnt. Pair people up, put aside money for training and time for learning.

If people have tried and been continuously blocked before then they may not feel empowered to change.

Let people know that it’s ok to experiment and celebrate it.

Change can mean that everything that we have worked on will be thrown away. It’s worth remembering the IKEA effect, a cognitive bias where we place more value on something that we have made than it’s actually worth. Even if you think something is not useful, remember that someone else might not.

Don’t throw everything away, build on what is already there.

And finally, people don’t understand why things are changing and may have mixed messages about the change.

Much like we did at the beginning of the talk.

The Satir change curve (also known as the j curve) is used in organisational change to talk about what happens when a big change is introduced. An organisation can go into chaos and performance is reduced, before new ways start being integrated and we move towards a new status quo. When the organisation goes into chaos, it can be mistaken for the change not working, so the organisation changes again, which can reduce performance again and so on. The same can happen in a team a big change, like replacing half the team members will lead to a big dip in performance.

Kaizen, literally translated as change good, is used to describe small continuous changes, a less revolutionary approach to change in teams and organisations.

Here is a The Toyota improvement kata is a tool that you can use with teams. It uses vision, goals, small changes and experimentation towards the new status quo. There are four steps:

Step 1: Understand the direction of travel, what is the vision that you want for your team (the exercise we did at the beginning of the talk).

Step 2: Grasp the current condition, where are we now. This helps understand if changes we make are helping.

Step 3: Establish the next target condition, what is the next goal towards your vision?

Step 4: Experiment towards the target condition, this is where the scientific method and hypotheses is important. Try things out, see what works and keep making small changes.

There is a wrong way to do change and that is telling people to change, rather than questioning and helping them understand their own motivations.

This video from the Behavioral Science guys is a great example of how this can work.

So let’s look at a tool to help identify what needs to change.

Agile teams have a meeting called the retrospective, this can take a number of forms and can be based around the Toyota improvement kata.

Your team should be taking the time to inspect and adapt the way they work every other week.

We then did a 30-second retrospective. I asked the audience to get into pairs and gave them 30 seconds each to talk. This helps develop the retrospective habit and can be done at any time with the team.

I asked them to think about the vision they wrote down at the beginning and talk about:

Map out your workflow and discussion pain points, target these pain points to make improvements.

Collect a list of things that block you and for how long, review these regularly to see how you can reduce the most common ones.

It can be difficult to remember everything as a set point every two weeks. Save things that have gone well or not gone well on a board or in a #retro slack channel to refer to when you do your retrospective.

Not everyone opens up in a group environment, have one to ones with people to find out what they really think.

Use tools like the five whys to dig deeper into problems and find out why they are happening and how you can reduce them.