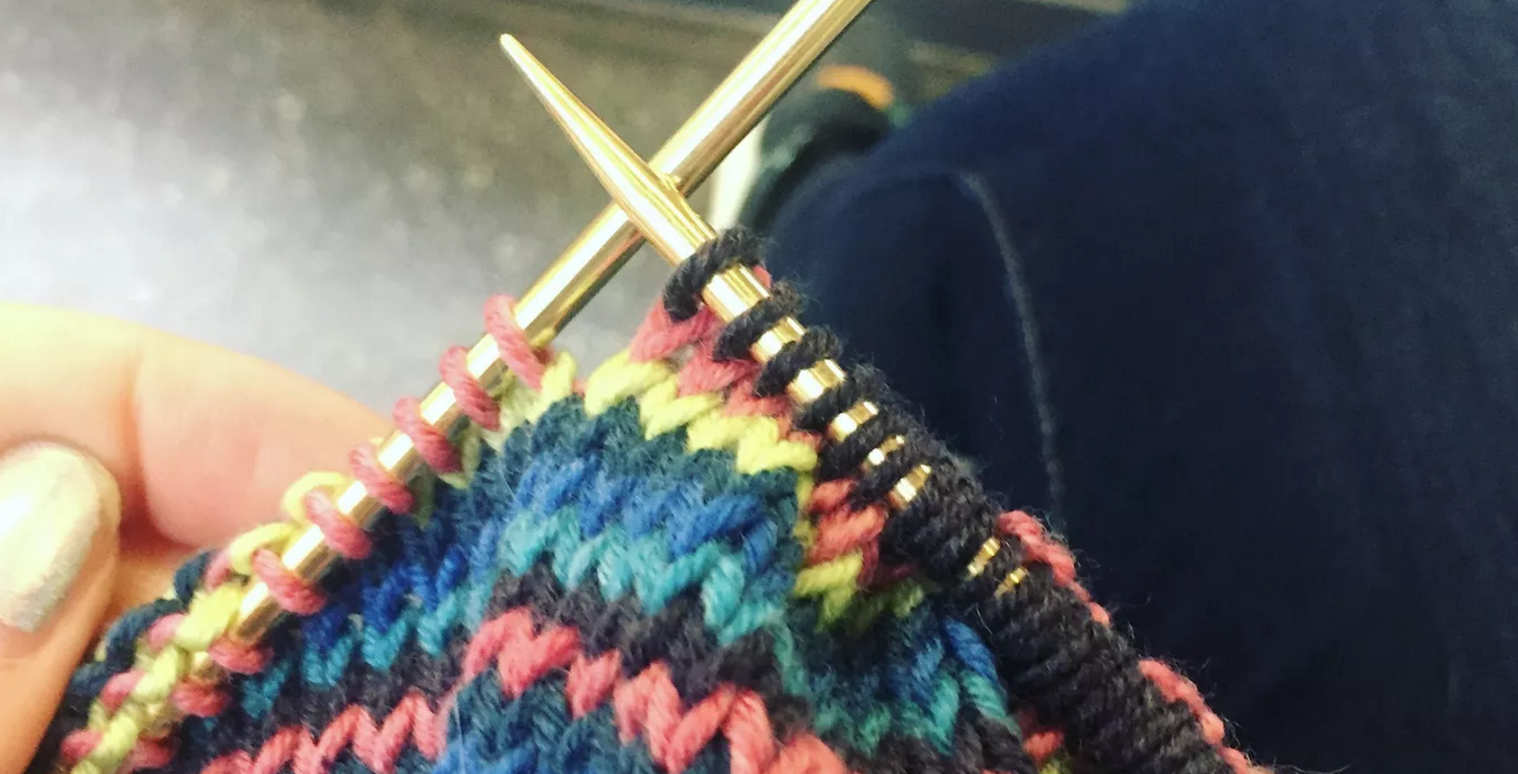 I have recently taken up knitting (as anyone that follows me on Instagram will know) and as well as helping me build an increasing collection of brightly coloured hats, it’s helped remind me about the process of learning and how this relates to people learning agile. Which is always a good reminder as an agile coach.

I had been thinking about starting knitting for a while and was spurred on after seeing Kris Howard talk about it at the YOW! conference in Australia at the end of last year. I have knitted in the past when I was much younger, although never mastered the purl stitch.

The basics of knitting are fairly easy, there are two main stitches you need and everything else is a variation or combination of these. Those stitches are ‘knit’ and ‘purl’ (basically a back to front knit). Then it gets more complicated from there.

Here are five tips for learning any new things based on my knitting experience:

I was originally slightly overwhelmed by knitting patterns. They are written in code, which you have to decipher before you can start knitting anything. It already felt like a special club with a language of its own (not unlike a lot of agile methodologies).

So to get me started, I bought a kit that came with needles and yarn, although I still had to understand the pattern and use youtube to learn to how to purl.

As I am learning new terms, I often have to remind myself what they mean, then watch and rewatch tutorials to help me.

Tip: It’s always worth remembering that when language is new, it takes a while for people to understand what it means. It can be overwhelming to throw a whole new set of terms at someone without giving them time to work out what they mean and have time to practice them.

2. Learn the rules and have small wins

The first hat I knitted was easy, the yarn was very chunky and needles big (10mm UK or size 15 US for those interested) which makes it really quick to make something. Buoyed up by my success I quickly found another pattern, bought some yarn and needles and got going.

But it didn’t go so well. The yarn I bought was very light weight and in a skein (or maybe it’s called a twisted hank) rather than a ball. I didn’t know how easily these can become a tangled mess and that most people wind them into a ball first. So the expensive wool I bought ended up as a cat toy.

I then went back to basics and found easier patterns to practice with, I learnt that scarfs take ages, chunkier wool is much easier to deal with (and undo) and colourwork is not as hard as it looks.

Tip: When someone is learning for the first time, they need small victories and not try to take on too much. Failing early on can be disheartening and lead to giving up and returning to the safety of what they already know.

3. Following a pattern makes it easier to learn

I very quickly really wanted to make super cool colourful things like Annie Larson, she designs her own patterns, makes up designs as she goes and uses colour techniques like intarsia. She also uses a knitting machine. These are all more advanced techniques and I had to learn by following patterns before I could even attempt to create something different and I’m a long way off from where I’d like to be.

Tip: Following a pattern is a good way to learn some basics, trying to take on too much at once leads to being overwhelmed and missing out on some fundamental building blocks. Giving people patterns to follow and not bombarding them with too many options will give them time to understand the boundaries of what they are learning so they can break them later on.

4. Create a safe-to-fail environment with the ability to undo

One thing I learned after the skein/cat toy incident was to not spend a lot of money on yarn while learning. You can pick up some pretty awesome coloured acrylic yarn for less than £2 a ball, which makes it much cheaper to fail. You can also really easily undo a knitting project if it isn’t working out, particular if you are using chunkier yarn. These two factors make it much easier to take risks and learn from those risks.

Tip:  People need a safe-to-fail environment to learn in, where mistakes can be made and risks taken. This may mean allowing people the time to learn with the close support of others, or being put in real life low-risk situations where they can undo.

5. Someone has tackled a problem before, ask others and the internet is your friend

If I hadn’t had access to so many knitting blogs and videos then it would have taken me a long time to get to where I am. I learn knitting techniques best through video, I find it easier to see how someone else does it and try to follow along. If I have a challenge or a new idea, chances are that someone else has thought of something similar and I can learn by mimicking or building on top of their ideas.

Tip:  People need to be able to experience new ideas that they are learning, have the opportunity to learn from others and not be afraid to research new ideas. There is a lot of knowledge readily available, use it.